Web-scraping is an important technique, frequently employed in a lot of different contexts, especially data science and data mining. It can also contribute as a part of an automation pipeline. Python is considered the go-to language for web-scraping, the reason being the batteries-included nature of Python; you can create a simple scraping script in about 15 minutes and under 100 lines of code. So regardless of usage, web-scraping is a skill that every Python programmer must have under his belt.

Before we start getting hands-on, we should step back and consider what is web-scraping, when should we use it and when to avoid using it. As you already know, web-scraping is a technique employed to automatically extract data from websites. What’s important to understand is, web-scraping is a somewhat crude technique to extract data. If the developers of a website are generous enough to provide an API to extract data, that would be a lot more stable and robust way to do it. So, rule of thumb, if a website provides an API to programmatically retrieve their data, use that. If an API is not available, only then use web-scraping. With that being clear, let’s jump right into the tutorial.

For this tutorial, we’re going to scrape http://quotes.toscrape.com/, a site that lists famous quotes by renowned authors.

We can understand web-scraping as a pipeline containing 3 components

It only seems logical that to extract any data from a web-page, we first have to download it. There are two ways we can go about doing this:

Now let me show you how can we achieve this component of the pipeline using Selenium and Requests.

Here, a GET request is made to the URL, which is almost synonymous to downloading the webpage. Then, we can get the HTML source of the page by accessing the result object returned by the requests.get() method.

In both the cases, the HTML source of the URL is stored in the page variable as a string.

Without getting into theoretical computer science, we can define parsing as the process of analyzing a string so that we can understand its contents and thus access data within it easily. In Python, there are two libraries that help us with Parsing HTML, BeautifulSoup and Lxml. Lxml is a more lower-level framework than BeautifulSoup, and we can use Lxml as a backend in BeautifulSoup, so for simple HTML parsing purposes, BeautifulSoup would be the preferred library.

But before we dive into parsing, we have to analyze the web-page’s HTML and see how the data we want to scrape is structured and located. Only when we’re armed with that information, we can get the information we want from the parsed HTML. But thankfully, we won’t have to open the source code in an editor and manually understand and correlate each HTML element with the corresponding element in the rendered page. Most browsers offer a Inspector, which enables us to quickly look at the HTML code of any element just by clicking on them.

To do this in Chrome, open the web page in Chrome, then right-click on the data you want to scrape and select Inspect. In Firefox, this option is called Inspect Element. Same thing, different name. 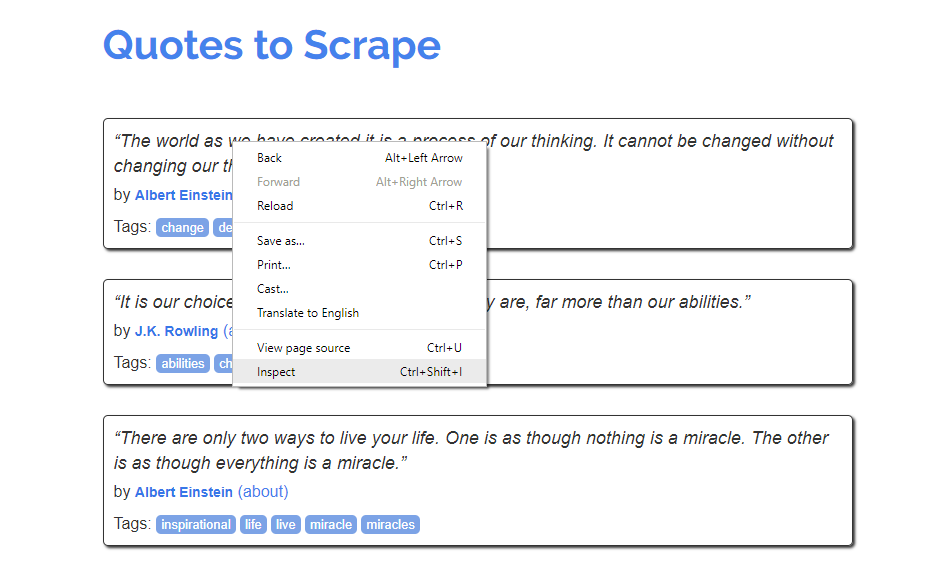 You’ll notice a pane opened at the bottom of the Chrome window, containing the source code of the element you clicked on. Browse through the source code a bit to get an idea of how the data which we want to scrape is structured. 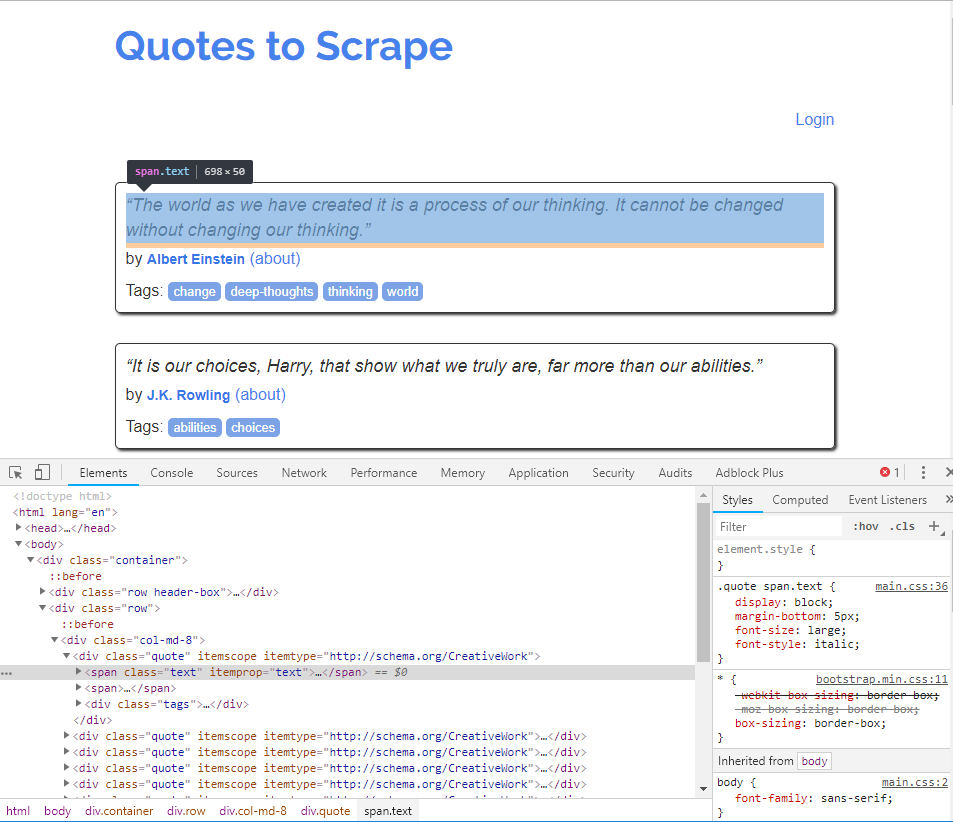 As you can understand after a little bit of inspection, each quote is contained in a div with class="quote". Within that div, the text of the quote is in a span with class="text" and the author’s name is in a small with class="author". This info will be required in when we get to actually parsing the HTML. 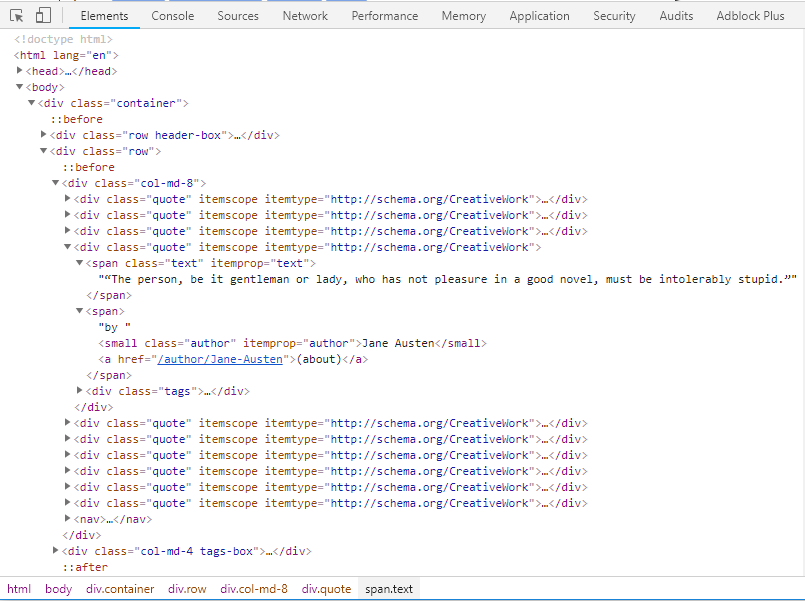 First of all, we create a parsed version of the page by passing it to the BeautifulSoup class constructor. As you can see, we also pass a second argument to the constructor, html.parser. That is the name of the parser BS4 is going to use to parse the string you passed to it. You could’ve also used the parser lxml, which we previously talked about, given that you have Lxml installed.

Then, we extract all the div tags in the page containing class="quote", as we know those are the divs containing quotes. To do this, BS4 offers a find_all function. We passed the tag name and the class name to the find_all function, and it returned all the tags satisfying the conditions, i.e. the tags containing our quotes.

An important thing to note here is, we’re working with tree structures here, soup and also each element of quotes are trees. In a way, the elements of quotes are parts of the larger soup tree. Anyway, without drifting off into a different discussion, let’s carry on.

Now, we know that the text of the quote is in a span with class="text" and the author is in a small with class="author". To extract them from the quote elements, we again employ a similar function, find. This takes same arguments and functions almost the same as of find_all, the only difference being it returns the first tag satisfying the conditions, whereas find_all returned a list of tags. Also, we want to access the text property of the returned object, which contains the text enclosed within that tag.

So, as you can see in the code, we loop through all the elements of the list quotes, and extract the quote text and author name, storing them as a list of lists with the name scraped. Pretty printing scraped results in the following

Once we have acquired the data, we can store it in whatever format we want; CSV file, SQL database or NoSQL database. To be strict, this step shouldn’t count as a part of the scraping process, but still, I’ll cover it briefly for the sake of completeness. I’d say the most popular way of storing scraped data is storing them as CSV spreadsheets, so I’ll show you how to do just that, very briefly. I won’t go into the details, for that you should refer to the official Python documentation. So without further ado, let’s jump into the code.

Conclusion and next steps

This tutorial should help you understand what scraping is basically about while learning to implement a simple scraper yourself. This kind of scraper should suffice for simple automation or small-scale data retriever. But if you want to extract large amounts of data efficiently, you should look into scraping frameworks, especially Scrapy. It’ll help you write very fast, efficient scrapers using a few lines of code. Whatever framework you use, underneath that shiny surface that framework is also using these very basic scraping principles, so understanding this tutorial should help you build the foundational knowledge for your scraping adventures.